This text is a transcription of the file in PDF format. 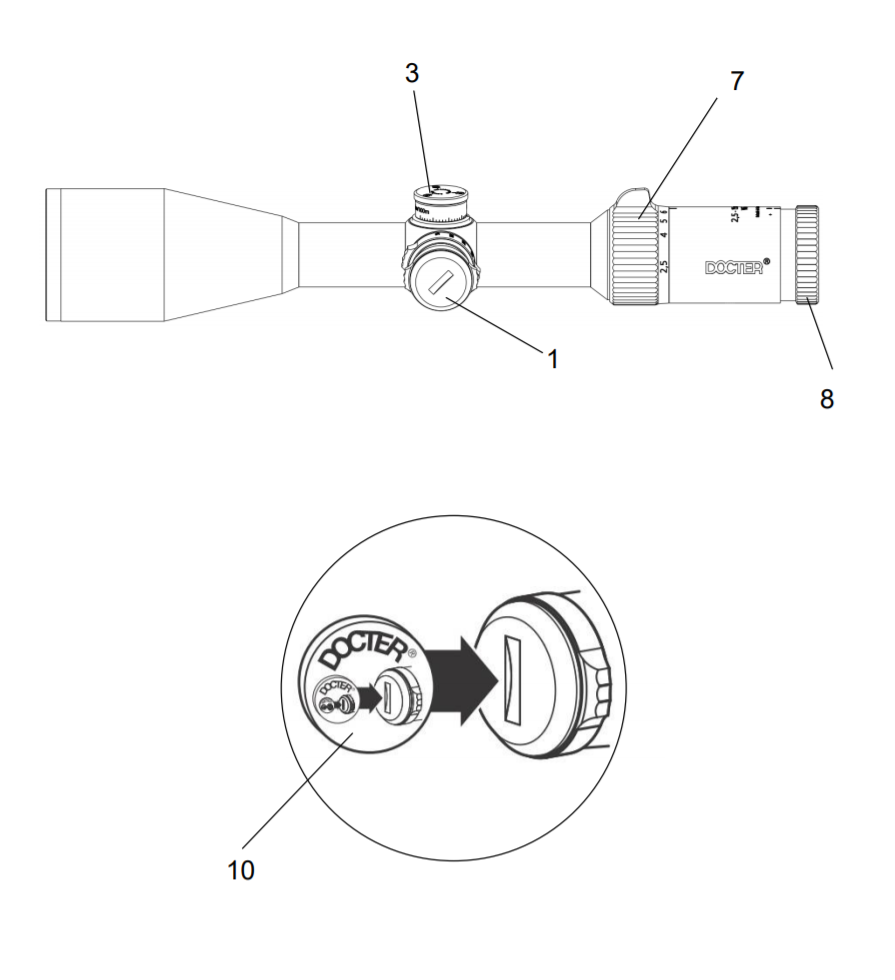 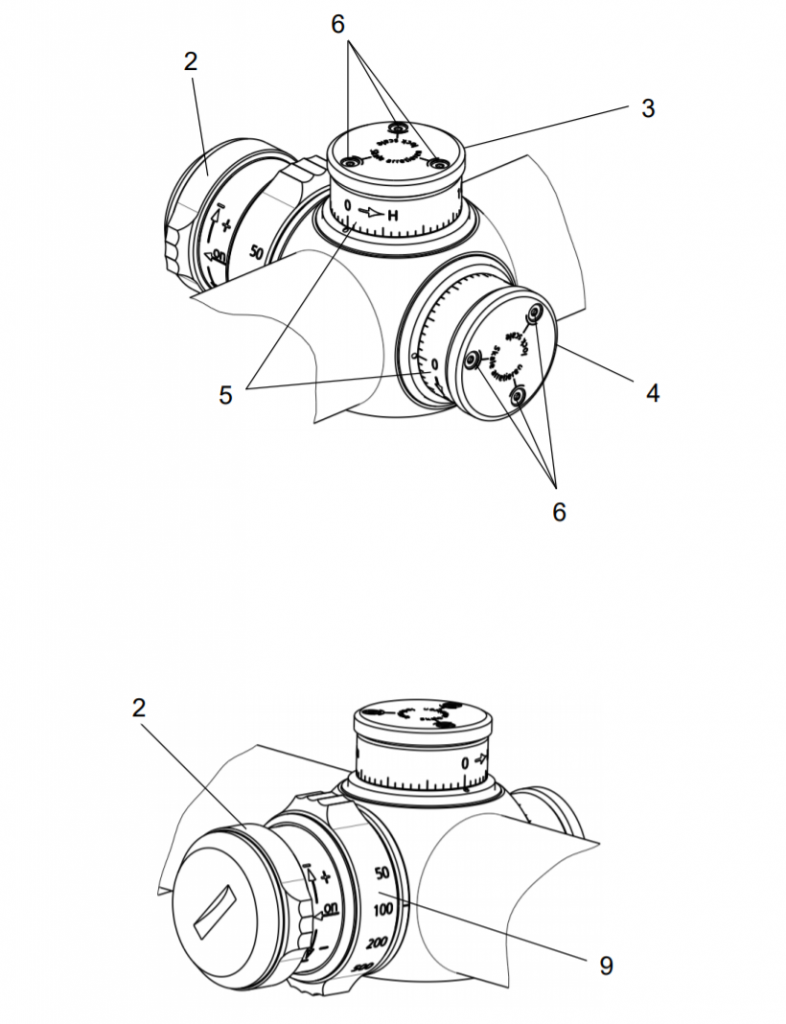 Please note when disposing of sighting mechanisms with electronic parts:

Please note when disposing of batteries of sighting mechanisms:

Please read these operating instructions carefully before using it for the first time, in order to avoid malfunctions.
When handling the rifle scope in combination with the weapon, observe the generally
accepted safety regulations for the handling of firearms.
Rifle scopes contain detachable small parts. Caution: danger of swallowing for children. 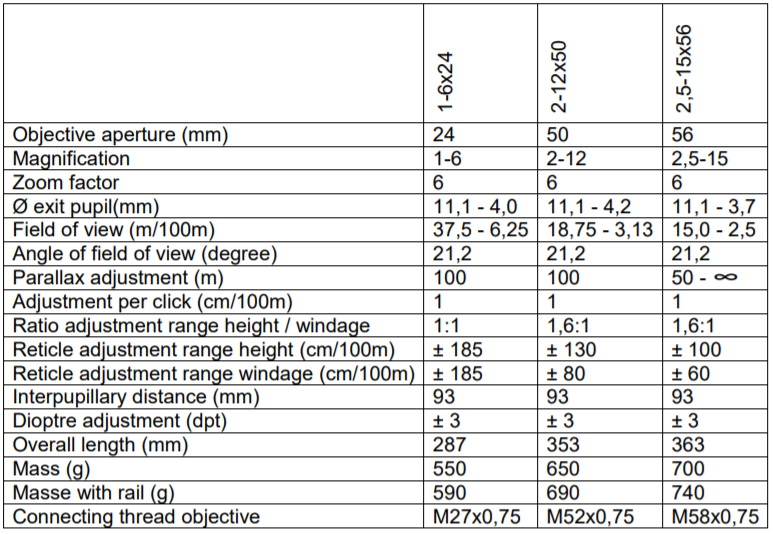 To insert / change the battery, loosen the cover of the battery compartment (1) of the
lighting unit by means of the supplied chip (10). When inserting the battery, make sure
that the plus sign is visibly at the top of the battery. To remove the button cell, press
down its edge, until the battery disengages and is protruding.

Brightness control of the reticle illumination

The electronics of the reticle illumination has a memory function. The brightness value
which has been set last before switching off is saved and is instantly available after
switching on again.

If a low battery voltage has been detected, a warning is issued by rhythmic flashing of
the illuminated dot, which indicates timely that the battery has to be changed soon.

For the shooting adjustment / ballistics correction, screw both protective caps off the
domes of the reticle adjustment. By turning the subjacent handle elements, the hit point
position is changed, namely the top dome for height, and the right-hand dome for lateral
adjustment.

Turning the handle elements in direction of the arrow will shift the hit point upwards.

Turning the handle elements in direction of the arrow will shift the hit point to the right.
In order to ensure a quick locating of the „zeroed-in“ zero position of the reticle when
using different ammunition or fillings, the scale discs (5) can be zeroed. In order to do
this, loosen the 3 screws (6) at the top side of the adjustment turret by means of the offset screwdriver contained in the scope of delivery (half a turn). Now the scale can be
turned and be positioned at the desired place. In order to fix the adjustment, all 3 screws
(6) must be locked again.

The defined latching steps of the snap-in locking as well as the scale discs (5) for retrieving the zero point allow an exact, repeatable hit point correction.
The end of the adjustment range is perceptible due to the end stops.
In order to avoid unintended adjustments and to prevent damage of the adjustment
units, the protective caps must be re-attached after the shooting adjustment.

The visual acuity is set by turning the dioptre ring (8). A possible eye defect is compensated when the reticle is perceived clearly during relaxed seeing.
Eye defect compensation is possible up to  3.0 dioptre.

Depending on the shooting distance and the light conditions, the suitable magnification
can be easily adjusted by turning the vario-ring (7).
For a better orientation, the most important magnification values are engraved into the
vario-ring (8), where also any interim magnification can be continuously set, with a constant image quality, visual acuity, and perfectly maintained hit point position.
DOCTER V6 2,5-15×56 with parallax compensation
For avoiding aiming errors at high magnifications, the DOCTER® V6
2,5-15×56 comes with a parallax compensation adjustment (9). At shooting distances of
clearly above or below 100 m, therefore the hit point deviation caused by parallax can be
compensated by adjusting the target distance at the parallax ring (9). The range of the
distance setting is from 50m to infinite. The adjustment limits are clearly perceptible due
to the end stops.

For the protection of the external optical parts, protective caps that are joined to each
other are supplied.

Your DOCTER®rifle scope requires no special maintenance. At first, blow away large
dirt particles (e.g. coarse dust, sand) on the lenses or remove them with a soft brush.
For the subsequent thorough cleaning, it is recommended to slightly breathe upon the
lenses surface and the cleaning with the supplied DOCTER®
optics cleaning cloth made
of high quality micro fibre.

All DOCTER® V6 rifle scopes come with the DOCTER®multiclean lens coating. The effective protective coating for the lens surface significantly reduces the pollution of the
lens. All kinds of pollutions adhere less and can be removed quickly, easily and free of
streaks.